I’m not sure why I am feeling a bit nostalgic today, but I find my mind thinking back to the first job I ever had. The summer of my fifteenth birthday, June 1973, I started working for Paul’s Drive-In in Shelby, Ohio (with your parents’ permission, you were allowed to work like up to twenty hours a week at fifteen). I remember being so stoked when my Mom and Dad said “OK” and I began what would turn out to be a number of years in the food service industry. And it all began at Paul’s…

Paul’s Drive-In in Shelby, Ohio was an old school drive-in, not quite Arnold’s from Happy Days but pretty much like it. We had only female car hops that clipped trays of food onto car windows, and all guy “chefs” that mostly worked deep fryers and grills. The menu was pretty simple – burgers and hot dogs mostly, and ice cream. Delicious, glorious soft serve in any number of presentations: splits, sundaes, floats, malts. I loved it…

When I was hired, my job was mostly to “patrol the lot” (the hops served 20 cars), making sure litter was kept in check and watching for the occasional spill or food accident (those trays slipped off roll-up car windows pretty often). In those days, Paul’s was open like April 1st thru October 31st, then closed for the winter. The owners, Paul and VeraMae Schrock went to Florida for the winter. I worked there the entire summer of 1973, then went back to school. I made $1.05 an hour and the car hops each tipped me a dollar every night I worked. Sometimes when we were really busy – like Saturday nights – I helped carry heavy trays, and the ladies would give me $2.00. I distinctly remember my first “paycheck” was for $18.80, after taxes. Mrs. Schrock hand-wrote each check and handed it to you in an envelope at the end of your shift every Friday. The Christmas of 1973, I received my first Christmas bonus – a card, all the way from Florida, from Mr. and Mrs. Schrock, wishing me a “Merry Christmas” with a crisp $5 bill inside. I felt rich.

The next year, the Schrock’s called me back to work “…for the season.” A sixteen-year-old hotshot now, I asked if I could work inside, get more hours and get a raise. I was “bumped up” to $1.15 an hour, did get more hours and, in addition to policing the lot (that meant I checked it when I came on my shift and before I went home – a step up from the patrolling spot), I also got to do the drive-thru window. Yeah, buddy – cool.

Since the lot held limited cars, the drive-thru was the Paul’s money maker, especially on the weekends. I was excited – I knew I would be the next Soft-Serve “God.” For my training, Mrs. Schrock told me I needed to know how to make five things fast: regular cones (easy-peasy), milkshakes (see above), which we offered in limited flavors, so no big deal. Next thing? “Sprinkle cones” – 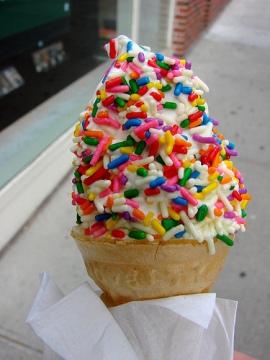 Not too bad – I just had to “draw the cone” and then hold it inside this crazy machine that spun around and dropped sprinkles on it. Next, the KING of frozen treats, the banana split. Always the most time-consuming and most expensive – I think Paul’s banana splits were like $3.95 in 1973 – they looked like this without all the extra prop fruit…

And then, finally, my worst nightmare: the Dip Cone.

Dip cones were regular ice cream cones, turned upside down and “dipped” into a hot, artificially colored-and-flavored mixture that produced a hard shell. They are pretty standard fare now at ice cream stands but, at the time, they were still kinda’ new (at least in Shelby). And for me, they were torture to make.

Listen, I can still draw a cone like nobody’s business – you should see me at upscale Chinese Buffets, LOL! But back then, every time I turned that cone upside down to dip, my ice cream fell into the shell mixture and made a mess. I mean, imagine turning a soft-serve cone upside down to dip it in one of these:

in an effort to (hopefully) produce something that looks like these, which mine never did:

So yeah, after my ice cream “plopped” into the hot, molten dip mix, I would have to fish it out with a spoon, trying not to burn myself on the dip warmer (water like only two degrees under boiling kept the dip mix hot – and the dip mix holder, too!) All the while this was happening, the line at the drive-thru was backing up and I was losing face with Paul and VeraMae. Dip cones were my nemesis. We had a rough start that summer, dip cones and me but, by fall, I was a master at all the “novelty techniques.”

That season closed and I was done again. But by that time, I had enjoyed “my own money” and took another job over the winter. I did not go back there come spring of 1975 – by that time I was a “too cool junior” – plus I had a fake ID and a car. I stopped on the lot often, and ordered an ice cream or a shake at the drive-thru but never worked there again.

Paul’s Drive-In still exists in Shelby, although it has traded hands and now has an eat-in dining room and no car hops. The drive-thru window is still there and, usually once a summer, when I visit my Dad, I’ll drive through the window and get a half-n-half cone (half vanilla, half chocolate – sometimes called a swirlie).

I like going back there. It is familiar and different. I can still see the numbers on the parking lot spaces, although they are so faded now that I doubt if anyone else still sees them. One thing I do know, though – Paul’s ice cream still tastes better to me than any other ice cream. One lick and I am 16 again…